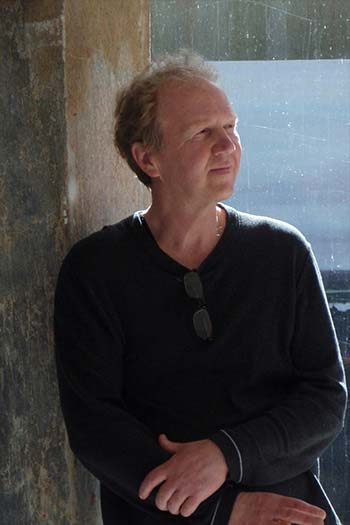 Helmuth van Galen (1955) was born in Haarlem and lives and works in the same city. From 1979 to 1981 he was at the Gerrit Rietveld Academy in Amsterdam and from 1981 to 1985 he studied at the Academy of Fine Arts in Amsterdam.

By bicycle through France

Van Galen began his artistic journey with copying at the age of fourteen; he was there then to overcome what he saw. Every day he went out to draw and paint later. After training as a teacher he went for a year out, by bicycle through France. Here he painted and sold his work in markets. After two years at the Gerrit Rietveld Academy, he completed training as a teacher in painting at the Academy of Fine Arts in Amsterdam. The academy was his living room, his studio, where he worked a lot of nights. Independent artist was his calling.

Galen operates from a fixed theme; he paints not just something that does not suit him. The first theme that of Galen focused on was ‘Archi Paints’ a combination of architecture and ‘paintings’. For example, he painted the structure of a building with large colour fields and lines in it. In the course of time these buildings with colour fields were however interiors. Helmuth says: “I then had a studio in an old mill in Heemstede and ‘inner space’ for several years has been my inspiration. I never copied the space, but used the interesting parts. Then I formed these parts into a new whole.”

Later he painted from the theme of ‘outside space’. This theme emerged from an exhibit called ‘View of Haarlem has never left him. Eventually Van Galen wants his work to create an after-perception of a space. “A painting should be a non-specific, but a recognizable space. Painting is an indirect or delayed form of communication. I want to make paintings that people recognize and understand, but they also surprise. Each work should be challenging; it should be more than just a pretty landscape.”